CHINA: Beijing Suburban Railway Co inaugurated two services on December 31 linking the capital with its outer suburbs.
The Sub Central Line links Beijing Xi with the sub-administrative centre of Tongzhou to the east of the city. Services run from Beijing Xi to Beijing main station through the 9·2 km cross-city tunnel which opened in 2015, before using a section of the Beijing – Harbin main line.
Services call at four stations on the 29·6 km route, offering an end-to-end journey time of 42 min. A fleet of eight-car CRH6A electric multiple-units has been deployed to operate the line. These have a capacity of 1 479 passengers and a maximum speed of 200 km/h, although the maximum service speed is 160 km/h.
A 9·2 km western extension from Beijing Xi to Yamenkou is planned. This would add one station and offer an 18 min journey time from Beijing Xi to Yamenkou.
Services on the Huairou–Miyun Line also started on December 31. This 80·9 km route links Huangtudian to Huairoubei, using the tracks of the Beijing – Baotou Jingbao line from Huangtudian to Changping, and part of the Beijing – Tongliao route from there to Huairoubei.
Five stations are served using a fleet of NDJ3 diesel multiple-units. These have a maximum speed of 160 km/h.
In the future services would be extended northeast from Huairoubei to Gubeikou, which would add 56·7 km and two stations.
Post from http://www.railwaygazette.com 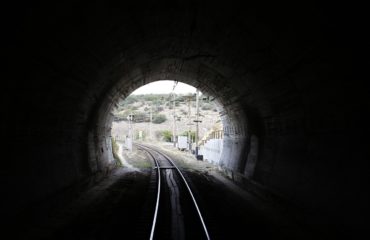